Who is Music Outback Foundation?

MOF had it’s origins as a collection of musician educators inspired to make a difference on remote communities through the sharing of their music and education skills.  It has since grown to a fully fledged organisation with a Board of Directors, a Melbourne based management office and of course our many wonderful facilitators who live around the country. 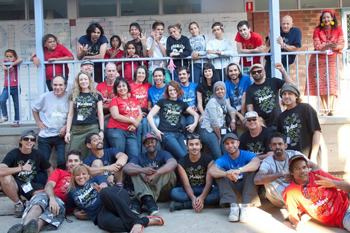 The Board of Directors

As the Founding Director of Music Outback Foundation, Steve has been there from the beginning – creating the early programs, growing the team and the relationships that have seen Music Outback develop its work and reputation in the bush.  He grew up as a family friend to Fred and Gabi Hollows, and has a professional background as an instrumentalist, producer, educator and composer.  Thanks to Fred’s early influences, Steve eventually found himself shaping ideas that had him calling on his musical colleagues to join him in forming Music Outback.  He  lives in northern NSW, working as a teacher and musician and continuing to maintain community connections as a MOF facilitator.

Gabi has been on the Board since Music Outback Foundation was formed in 2006.  She is a well known Australian, a Founding Director of The Fred Hollows Foundation and has been a passionate advocate for Indigenous health and equality since her involvement in the National Trachoma and Eye Health Program in the 1970′s.  Gabi and Fred and raised a large family, but when Fred was diagnosed with cancer Gabi made the commitment to make sure Fred’s work continued and the Fred Hollows Foundation was born.  Her commitment continues to this day, and her involvement with Music Outback Foundation is a natural extension of her long term commitment to Indigenous well being.

Michael Turner is a writer, singer, guitarist, producer/engineer & music educator.  In the 1980′s & 90′s he was a principal songwriter of the indie folk group “Wild Pumpkins At Midnight”. Successful in Australia & Europe, the band released 11 albums and won an ARIA Award for Best Independent Release of 1989.  Michael began work as a MOF facilitator in 2011 and has since taught regularly for MOF in Walgett NSW as well as Pipalyatjara, Murputja and Watarru in the APY lands in SA.  His music based community work is extensive, and includes regular travel to Maharashtra, India, where he conducts workshops for teachers and children to aid in the learning of English.  He also runs a successful music program at Namatjira Haven Drug & Alcohol healing centre for Indigenous men,  directs the music program at Byron Community Primary School, and leads his own children’s music band “Spikey & Friends”.  Michael brings a joyful can-do attitude to each and every project he is part of, and we’re happy to have him on the Board of Directors. 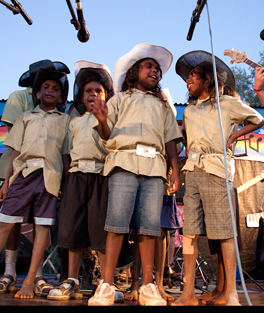 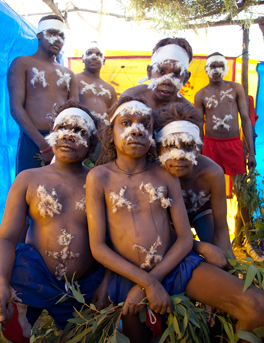